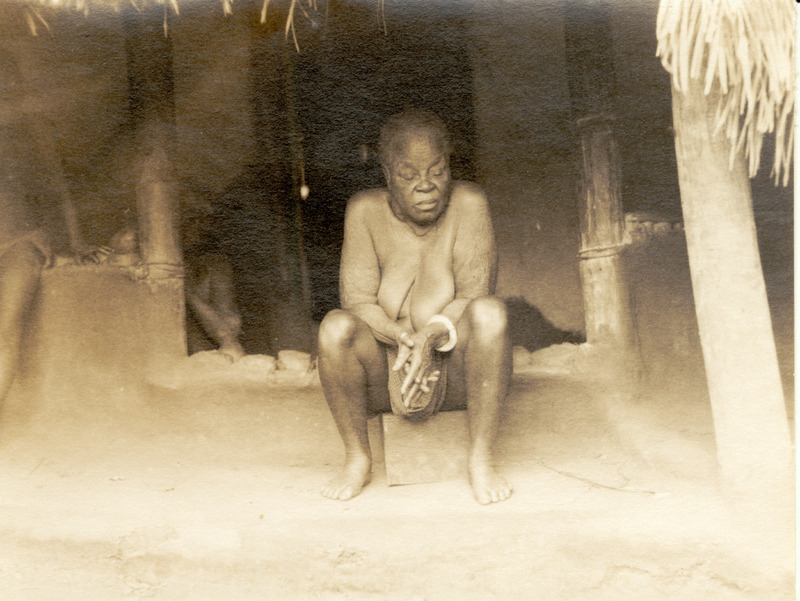 Dr. Joseph Guannu on the chiefly qualities of Suah Koko

Women in the United States during the 1920s were generally expected to forgo employment in favor of supporting their spouse and raising children. Women were dissuaded from seeking employment, becoming financial independent, and when possible, holding positions of authority. Liberian society had similar expectations for women, but Chief Suah Koko proved an exception. Chief Suah Koko was lauded not only as a powerful figure in Liberian society but as a woman chieftess she was hailed as unique within patriarchal Liberian society.

While diaries and letters from Dr. Richard Strong and Loring Whitman show their acknowledgment and recognition of Chief Suah Koko’s power, as Western men, they also brought with them their own expectations of the place of women within society. Upon arriving in the town of Suah Koko, Dr. Strong, having previously relied on gin and tobacco to win favor with local government officials and chiefs, presented Chief Suah Koko with more feminine gifts. Dr. Strong writes, “She wished to shake hands. I presented her with a powder puff case and mirror and a small bottle of scent (presents purchased in London by Harold for the natives).” (Richard Pearson Strong, Richard Pearson Strong Diary: September 1, 1926 Part II)  The gifts of perfume and a powder-puff case demonstrate to a small extent the imposition of western ideals upon a foreign female leader. The Harvard African Expedition’s assumption of difference with regard to female leaders was quickly dismissed. Loring Whitman writes of the encounter “She told Dr. Strong, thru our interpreter, that she liked white men – they brought plenty of gin and tobacco as gifts or “Dash” as they call it here.” (Loring Whitman, Dearest Family, September 22, 1926)

Loring Whitman echoes Dr. Richard Strong’s sentiments, “Sua herself is quite old – probably 70 – (I am corrected to 60 but who knows – at least she looks 70) – gray or rather bald – flabby and nearly blind. And with all this she still seems to exert a tremendous control over her people…Sua Koko one of few if not only woman chief.” (Loring Whitman, The Harvard African Expedition Book 1: September 3, 1926)  acknowledged descriptions of Chief Suah Koko are degrading, Loring Whitman writes of Chief Suah Koko in a letter home to his family members, “…she rules her land with an iron hand and is still as powerful as the best of them.” (Loring Whitman, Dearest Family, September 22, 1926)

As Dr. Strong notes “She seemed pleased with these [gifts] but said she hoped we had some gin and tobacco and that she was particularly glad to see us because she believed we had these articles. As a matter of fact all our trade gin is behind us. I gave the last two bottles of it I had with some tobacco and a tin of beef and a box of sardines to the Chief and Inspector of Zeanshu as a dash. However we will give the old lady some tobacco when she furnishes us with porters as she has promised to do, and I will leave word for George to give her some gin.” (Richard Pearson Strong, Richard Pearson Strong Diary: September 1, 1926 Part II)

The Expedition’s failure to produce gin and tobacco whilst staying in Suah Koko may well have led to the somewhat contentious photos Loring Whitman took of Chief Suah Koko. While other photographs of Chiefs taken by Loring Whitman during the Expedition are stylized and formal – such as Daniel Walker seated with his wives or Chief Gboveh of Gbanga seated behind a desk – the photographs of Chief Suah Koko show her sitting casually in the doorway of a house, glancing sideways at the camera or looking off in another direction.

“For me however she was not too friendly – for I had no gin – and would only sit on her doorstep in the shade despite my flattery about the honor of taking a picture of so rare & powerful a creature – the only (?) woman chiefess in Liberia. Still photographers must not complain and I took the best picture I could under the circumstances.”

As a woman during the 1920s, in a unique position of power, Chief Suah Koko may have become accustomed to dealing in the currency of power – gin and tobacco – or genuinely enjoyed these ‘dashes’. In either case, the Expedition’s decision to treat her differently than the other Chiefs, providing her with feminine gifts of cosmetics, did the members no favors.